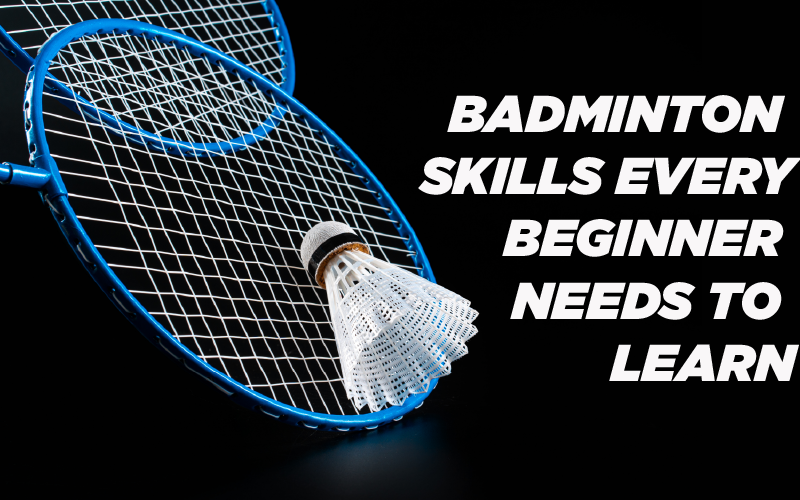 Badminton is considered one of the easiest indoor sports that can also be played on lawn and backyards. The basic objective of the sport is to pass the shuttle from point A to Point B over a net using rackets. It can be played with a team of two players or even singles. Badminton has been recognized globally as a competitive sport as well.

So if you are thinking about a competitive badminton game or if you wish to adapt the skills to master the game this article will help you. Even for beginners, learning these basic badminton skills can help increase both competitiveness and also the fun in playing.

Being Ready On Stance

Stance plays a vital role to perform better. You need to be ready for every shot. Proper stance will make your play easier and minimizes your movements to play a shot. The ready stance can be achieved by putting your non-racquet leg a step forward and about shoulder-width away from your racquet leg, a slightly bended knee with proper weight balance. You will need to bend forward slightly from your hip but the back will be straight. Hold your racket up and you may use your non-racket hand to improve your balance. The following picture will be beneficial for you to have a better understanding.

This stance is known as the basic stance. According to the game situation, you will need to change your stance a bit for better performance. Basically, there are 3 types of stances i.e. attacking stance, defensive stance and net play stance.

Adapt to The Different Grip Techniques

Not only for playing like professionals, if you know the techniques you will learn the skills to avoid injuries. And your performance will get better after following the techniques. Hold your racket like you are approaching a hand-shake. If you have a racket in your hand right now you will see that the racket handle is octagonal in shape, and it’s the same for every racket. These 8 sides of the handle are known as bevels and they allow you to grip the racket properly.

In simple words, if you don’t grip correctly your certain movements will be restricted due to improper wrist flexibility and result in injuries. And your performance will not meet your expectations. There are 2 types of grips. Forehand and Backhand.

The Thumb is the most crucial part in a backhand grip. There will be a gap between the palm and the handle and the index finger will be much closer than a forehand grip. You can check our other article here (link when published), for more about gripping techniques.

If you are having a perception that having a proper stance will make you a professional player, you are wrong. Footwork is a basic badminton skill that a lot of new players often overlook. But if you have the right footwork it will make the game so much easier as it will allow you to cover more ground around the court while using less time and energy. To cover more ground and have a quick change in direction sideways steps are best and this will also help you put less strain on knees. You may find this a bit difficult at the starting as we are not used to these lateral steps but practicing some drills to master this skill is very effective. Footwork is a vast concept to be learned, you may visit our  article relevant to it (Link when we publish the article) to know the effectiveness of footwork. Or you can watch the following video as well.

When you know stroke variations in badminton you can use them for more advanced gameplay. There are 4 basic strokes. They are:

Overhead Forehand – the most common stroke played by players. Played with a forehand grip. Widen your chest and use your non-racket hand to point at the shuttlecock to aim. Straighten out your racket arm then swing it towards the shuttle in a downward motion while slightly rotating your waist towards the front. Swing the racket until it’s pointing slightly downwards.

Overhead Backhand- the overhead backhand is slightly more difficult for beginners to master at first but doing so will set good foundations. A backhand grip is a must for this kind of stroke. As the shuttle approaches above your head level, slightly tilt your arm downward to gain momentum then swing up and flick your wrist upward until the racket is pointing up and your arm is straightened out. Remember to immediately go back to your ready stance once you’ve hit the shot.

Underarm Forehand– Lunge forward with your racket-leg from the ready stance and keep your racket arm slightly bent with the top of the racket’s head below shoulder level. Straighten your arm out to make the racket tilt backward then flick your wrist, followed by your arm to swing forward when hitting the shuttle. Balance the stance with proper hand movement and bend knees.

Underarm Backhand– Though its a backhand but easier than overhead backhand stroke. Dive towards your backhand area, Bend your arm downward with the racket handle parallel to the floor and the racket head parallel to your body. Flick your wrist upward, followed by your arm until your arm is extended straight and aligned with your shoulder.


Expertise On Your Serve

The rally of the play starts with service. The first hit to start off the rally after each point is termed as ‘Serve’ in badminton. The receiver is the person who hits the second shot in the rally. You can not serve as Tennis players do in badminton. In badminton you need to serve underarm and to the upward direction. The underarm backhand serve is the very basic you need to know before playing Badminton. To start, have a ready stance with your backhand leg slightly forward with both feet pointing forward. Lift your racket up to so it is parallel to the floor, with the head parallel to the net and aligned with your shoulder. Using your non-racket hand, hold the shuttlecock by the feather about 5-6 inches in front of the center of the racket’s face. Bend the wrist of your racket hand downward to generate momentum and flick upwards with varying strength depending on how far or how high you want the shuttlecock to travel.

Every sport requires certain skills. Badminton requires lots of stamina, running, power, jumping and so on. These skills are visible to understand. But apart from this skills like footwork, stance, grip, service are must in professional or competitive matches to achieve success. So if you are thinking about a competitive badminton game or if you wish to adapt the skills to master the game this article will help you. Even for beginners, learning these basic badminton skills can help increase both competitiveness and also the fun in playing.

Badminton; a sport for all ages, for all places. Badminton is enjoyed by children, youth, adults, and seniors and...